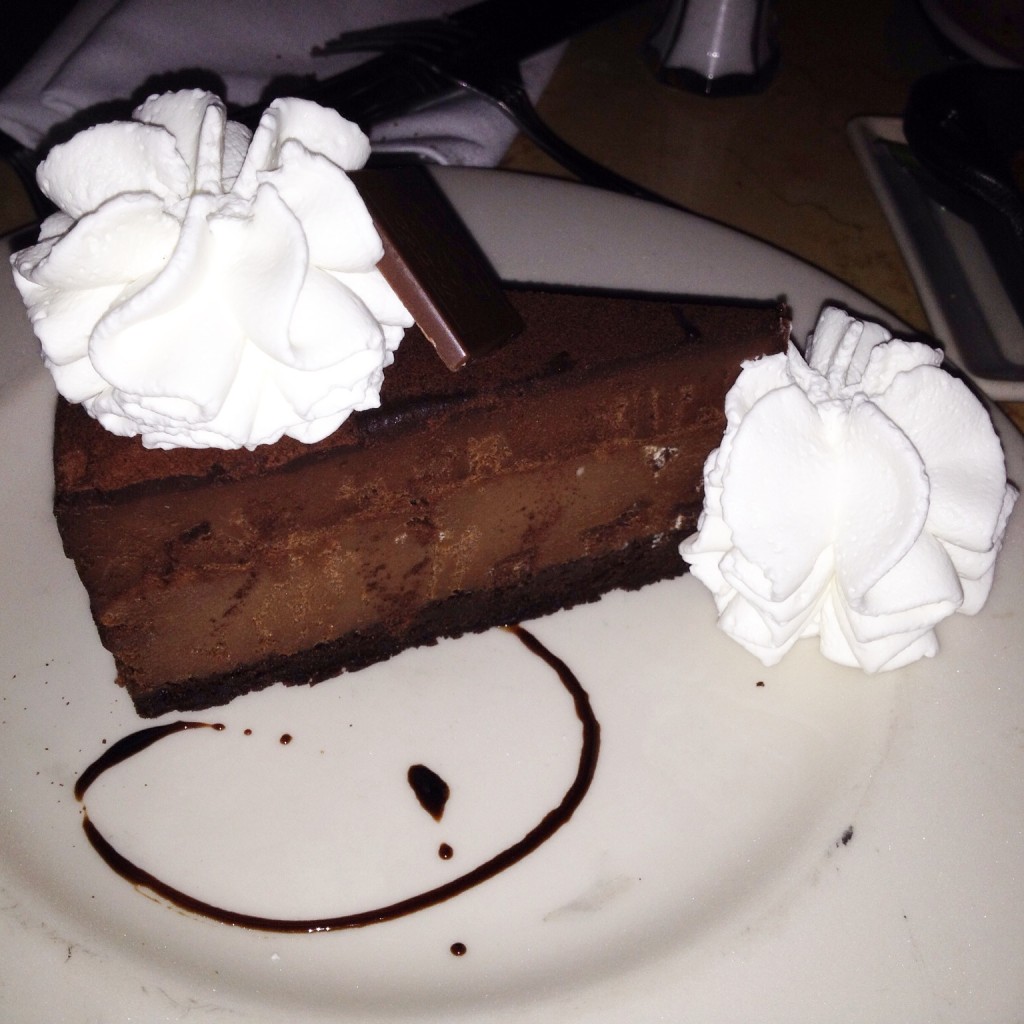 A chocolate addicts dream!Eating gluten free can be daunting especially when going out to eat at a restaurant. Thankfully many restaurants are aware of gluten allergies and have created specialty menus available upon request.Cheesecake Factory is among the many restaurants that has a special gluten free menu. They offer various dishes to chose from. One thing I will mention about these dishes is that it is created in a shared kitchen where other gluten dishes are prepared. That’s something to keep in mind depending how severe your gluten allergy is. Other than that, you will be pleased and satisfied ordering from this menu.Last night at Cheesecake Factory, it was National Cheesecake Day, which means half off cheesecakes! If you don’t already know, some cheesecakes recipes have flour crust or cookie crust such as graham crackers. That rules out a few cheesecakes off the list. BUT did you know that many cheesecakes have flour in their filling? For example, as a New yorker,  I know a classic “New York Cheesecake” has flour in its recipe. There are many different cheesecake recipes out there and there are many recipes that don’t contain flour. I don’t see the need to add flour to the filling except to thickening the filling. Now, back to my Cheesecake Factory night, they have a Godiva Cheesecake! That’s right! I said Godiva.Godiva is we’ll known for their rich chocolate. This cheesecake deliciously showcases the delicacy and richness in their chocolate.I must warn you, this cheesecake is addicting! It’s best to take your time when eating it. It’s dense, rich and chocolately. What I love about this cheesecake is that from top to bottom it’s chocolate. The outside “crust” of the cheesecake is chocolate ganache. The “top” of the cheesecake is dusted with cocoa powder…I assume Godiva cocoa powder. It’s out of this world! Only thing I felt that was missing was extra whipped cream. At times when eating this cheesecake, I felt the need for milk so I went for the whipped cream. But that was gone quickly and only thing I had was water. And it wasn’t the same as having the whipped cream.If your a chocolate lover, you won’t go wrong when ordering this cheesecake.Comment below if you love Cheesecake Factory!

I enjoyed playing with these new products. The met

Would you try this Cut crease?🌹🌷 Makeup Deet

Happy Sunday. Close up of this look 👀 @shopvio

Just uploaded this look on my #youtubechannel 🌸

I've been testing out #vennskincare for the past t

I love this color! Nails done at my favorite nail

Hope your enjoying your Sunday! I'm finishing up e

Back at it this warm teal look 🙂 Eyes: @juvias